Apple Hill farm is proud to offer the following varieties of apples:

McIntosh
What’s it like? ‘McIntosh’ has juicy white flesh and is sweet with a tang. It’s a favorite apple for eating out of hand but is also widely used in salads and sauces and pies and is a mainstay in fresh cider. ‘McIntosh’s tender flesh cooks down quickly and makes a great thickener for pies. ‘McIntosh’ is an apple for those seeking the classic flavor and texture of times gone by. more McIntosh

Background. In 1796, John ‘McIntosh’, from the Mohawk Valley in New York, transplanted some wild apple saplings he’d found near his homestead of Dundela, Ontario. One of the trees survived to produce fruit of such tangy allure and aromatic fragrance that it became well known in the region. This apple gained a large following and came to be known as ‘McIntosh’ Red. The variety is thought to be related to the ‘Fameuse’ apple of the region and has been a mainstay for New York apple growers and eaters for many years.

Cortland
What’s it like? Cortland is a juicy apple that has a hint of tartness, yet is sweet when compared to the McIntosh. Its color is a flush of crimson against a pale yellow background that is sprinkled with short, dark red stripes and tender, snow white flesh inside. It is excellent for fresh eating and for salads or baking. They are also wonderful for kabobs, fruit plates, and garnishes because the flesh does not brown easily when cut. more Cortland

Background. Developed by Cornell University’s Geneva Experiment Station in 1898, ‘Cortland’ is a cross between the ‘McIntosh’ and ‘Ben Davis’ apples. It retains many of McIntosh’s best characteristics, but is unique in its shape and flavors.

Background. This apple is an antique variety of that originated in early American times. The exact parentage is unknown since it was a chance discovery. George Hudson stumbled across a new and delicious variety in the 1880s. He originally named it Hudson’s Pride after himself. Later on, it was grown and marketed the same as Opalescent.

Empire
What’s it like? It is redder and firmer than ‘McIntosh’ and, some claim, its flavor, like fine wine, improves with time. It combines the mild tartness of ‘McIntosh’ with full-flavored ‘Red Delicious’ sweetness. It is excellent for eating out of hand and in salads and for use in baking and cooking. Small ‘Empires’ are great for school lunches as kids love its sweet-tart taste and super crunchy texture. more Empire

Background. Empire is definitely New York’s apple and is a cross between ‘McIntosh’ and ‘Red Delicious’. In 1989, international apple researchers ranked ‘Empire’ the 7th best apple in the world. The New York State Agricultural Experiment Station in Geneva introduced this new variety in 1966. 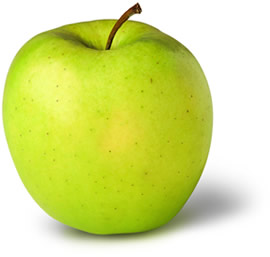 Mutsu aka Crispin
What’s it like? It is typically greenish on the outside and creamy white on the inside with firm-textured juicy flesh. It has a moderately sweet flavor and is excellent for eating, sauce, baking, and freezing. You can even try roasting whole ‘Crispin’ slices over an open fire for a real treat. Bite into a ‘Crispin’ for a great crunch and mouthful of sweet juice. It’s one of the most satisfying snacks around!. more Mutsu

Background. The Crispin (or Mutsu) apple is a 1930 cross between the ‘Golden Delicious’ and the Japanese variety ‘Indo’. Originally named ‘Mutsu’, it was renamed ‘Crispin’ in 1968 by the United Kingdom, and New York adopted that name several years ago. It is one of the later varieties, with a mid-October harvest in New York, and does double duty as both a fresh and processing apple.

Golden Delicious
What’s it like? Surprisingly, not closely related to the Red Delicious apple, the Goldern Delicious is a sweet apple that allows chefs to cut down on added sugar in recipes. It has many culinary uses in sauces, pies and baking, where its firmness helps hold its shape. It also has excellent mild, sweet flavor when eaten fresh and is also a popular inclusion in fresh apple cider. This honey sweet apple is a special treat all on its own. more Golden Delicious

Background. The second most popular apple variety in the world, ‘Golden Delicious’ is thought to be a cross between ‘Golden Reinette’ and ‘Grimes Golden’. It was discovered in Clay County, West Virginia in 1914 and was originally named ‘Mullin’s Yellow Seedling’. It is one of our most popular here at Stone Ridge Orchard. 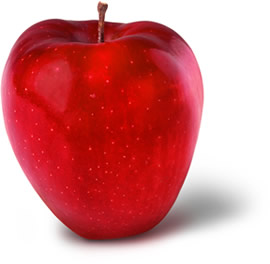 Red Delicious
What’s it like? The Red Delicious is a glossy red apple with a distinctive five-pointed elongated shape. It is best when eaten fresh rather than cooked. It is sweet and juicy and offers a crunchy texture. As one of the fifteen most popular apple cultivars in the United States, the apples also look great for quite some time and are favorites in holiday centerpieces and wreaths. more Red Delicious

Background. Without a doubt, ‘Red Delicious’ is the most popular variety in the world. It was discovered by a farmer named Jesse Hiatt as a chance seedling on his farm near Peru, Iowa. Twice he tried to chop it out. Once it finally fruited, he displayed it as the ‘Hawkeye’ variety at an 1893 fruit show in Missouri. The rest as they say is history.

HoneyCrisp
What’s it like? This apple is rapidly becoming the most popular among apple connoisseurs. ‘HoneyCrisp’ is truly an apple for the millennium. The fruit has an exceptionally crisp, sweet and juicy texture with a complex sweet-tart flavor. It is excellent for fresh eating, and salads, and is good for sauce, baking, and pies. This is one of our apples. more HoneyCrisp

Background. The ‘HoneyCrisp’ apple was produced from a 1960 cross between ‘Macoun’ and ‘Honeygold’, as part of the University of Minnesota apple breeding program. With strict requirements about where and how it can be grown, ‘HoneyCrisp’ is not for every grower. For those with the location and that are willing to give this apple the added attention it needs, a true treat awaits their customers. 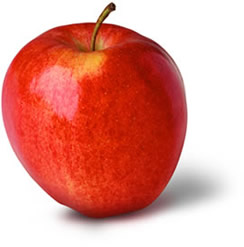 Gala
What’s it like? Gala is a relatively early apple that is fine-textured,  aromatic and has a snappy zest over a mellow sweetness. Its yellowish, juicy flesh is very firm. ‘Galas’ are noted for their eating quality out of hand. They are also quite excellent in salads and for the flavor they are able to provide for sauces and ciders. Of the apples consumed in the United State, the Gala is consistently ranked in the top ten. more Gala

Background. Gala is a cross between Kidd’s Orange Red and Golden Delicious. In recent years, buoyed by the success of ‘Gala’ imports from New Zealand, Americans have come to love the ‘Gala’ above almost all others.

Macoun
What’s it like? It is extra sweet and aromatic with a very juicy and tender, snow white flesh. It is excellent for eating and good for sauce and salads. For an extra special treat, try ‘Macoun’ slices with a sophisticated cheese like Stilton. These apples are only available for a limited time in the fall. Get yours today and enjoy! more Macoun

Background. Macoun was developed at the New York State Agricultural Experiment Station in Geneva in 1932 and was named for a famous Canadian fruit breeder. As one of the parents of the HoneyCrisp, it has many of the characteristics it passed on to its offspring. It has established itself as one the premier niche apples of the Northeast. Rarely found in grocery stores, Macoun can most easily be found in local farm markets like Apple Hill Farm.

Granny Smith
What’s it like? Granny Smith apples are light green in color. The fruit has hard, light green skin and a crisp, juicy flesh. They are popularly used in many apple dishes, such as apple pie, apple cobbler, apple crisp, and apple cake. They are also commonly eaten out of hand. Though tart if consumed early, the acidity mellows significantly on ripening, and it takes on a zesty but balanced flavor. more Granny Smith

Background. Granny Smith apples originated in Australia in 1868 when Maria Ann (Granny) Smith found a seedling growing by a creek on her property.The seedling bore light-green-colored apples that she propagated. Domestic apple growers began growing this apple commercially in the late 1960s, and today Granny Smith is one of the most popular apple varieties around.